Picking up our bus

« Previous: Finding The One Next: Our tips on demolishing bus interiors » 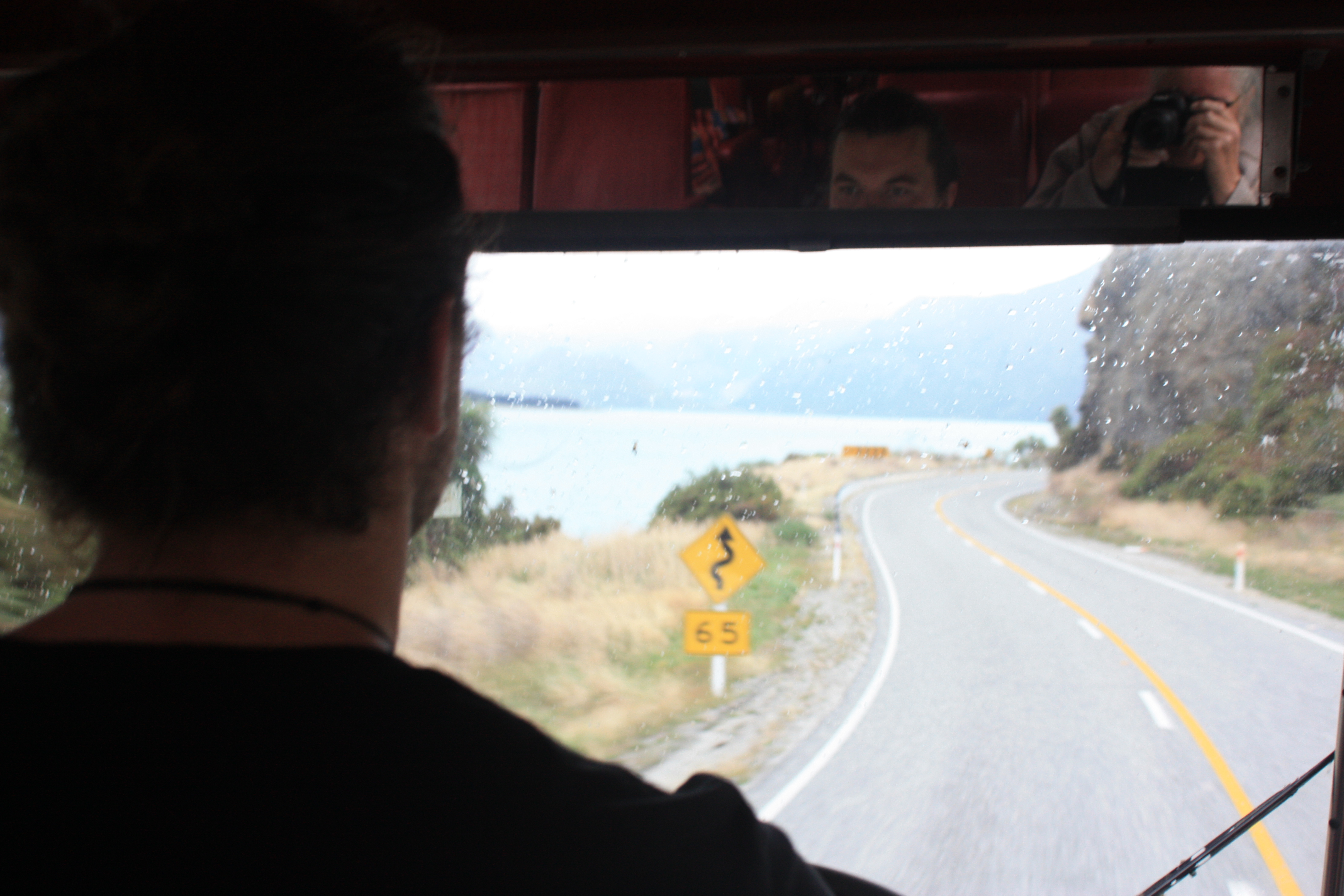 This is the epic tale of how I (Alex) proudly took ownership of our bus and took it on an unforgettable journey from Wellington (North Island) to our storage location in Clyde (South Island). This is also a tribute to all the beautiful, generous souls who helped us along the way, and together, made it all possible. 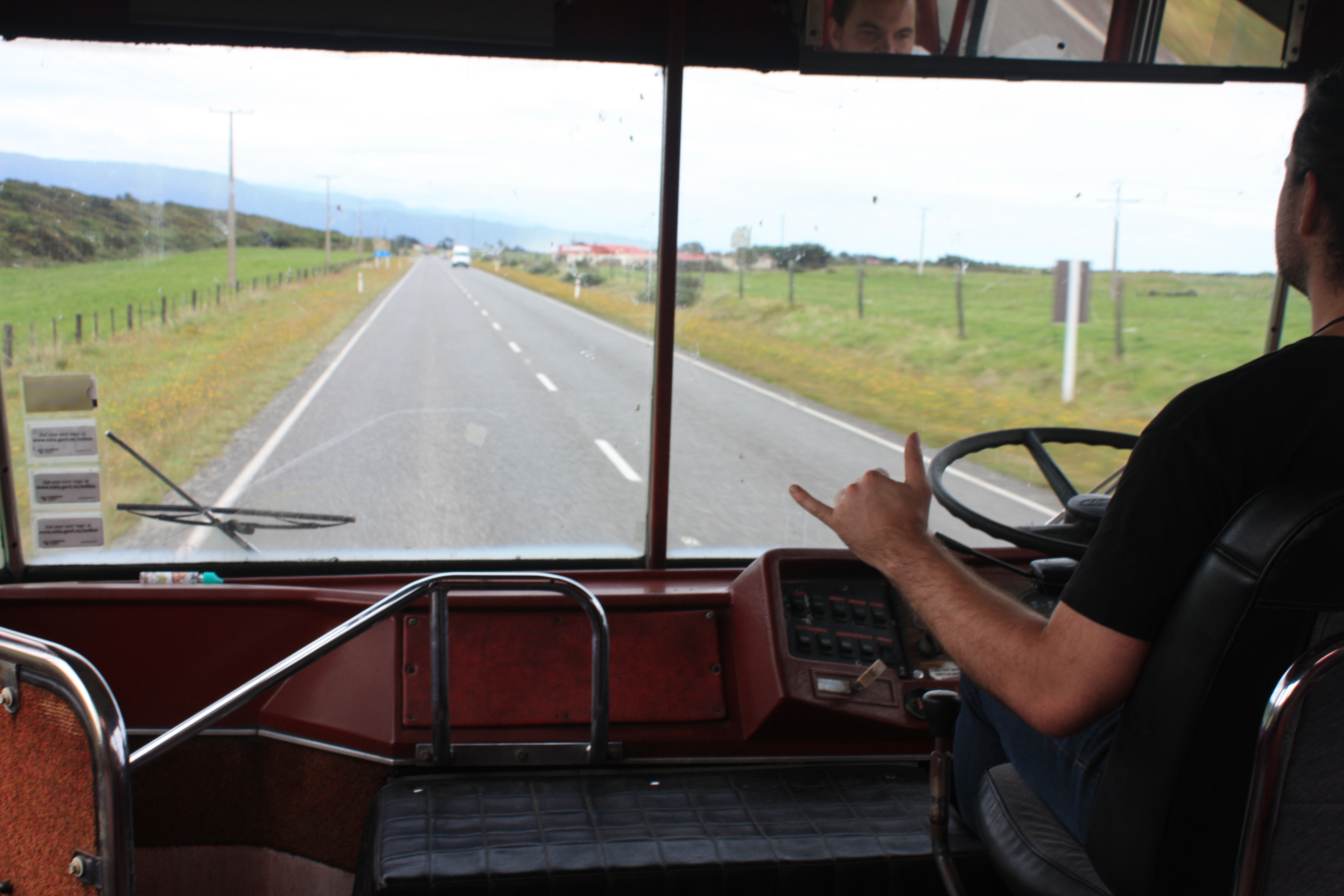 Cruising down the West Coast

I guess I’ll start at the start. First of all, I had to get from our current home in Brisbane to New Zealand - more specifically, to Arrowtown, where Mum was waiting for me. Bridget wasn’t able to come (visa complications) which was a big old shame, and naturally added a ton of pressure - it meant that this part of our journey was all down to me!

I decided to fly from the Gold Coast rather than directly from Brisbane, as the flights are almost half the price, and the penny-saving mode is now in full swing. On the eve of my trip, a huge thunderstorm hit Brisbane; howling rain, eye-watering wind, and thunder that made you jump. I was hopeful it would subside by the morning - storms never last long here. But subside it did not. Not ideal driving conditions, especially in our budget-friendly 1997 Nissan Pulsar. I was not off to a good start, and I sincerely hoped that this was not an omen for the trip to come.

It was a rather unpleasant drive. Rain = chaos. Especially in the Brisbane winter, no one here has seen a drop of rain for months! I managed to make it to the Gold Coast airport in one piece. The flight to Queenstown was uneventful (which was excellent), and Mum kindly met me at the airport and took me back to her place (love you, Mum). Once settled in at her house in Arrowtown, I enjoyed a couple of days catching up with her and Dennis (step-dad) before setting off on the most extended road trip I have ever attempted.

The plan was simple:

Step 1
Catch a bus from Arrowtown to Dunedin (5hrs) 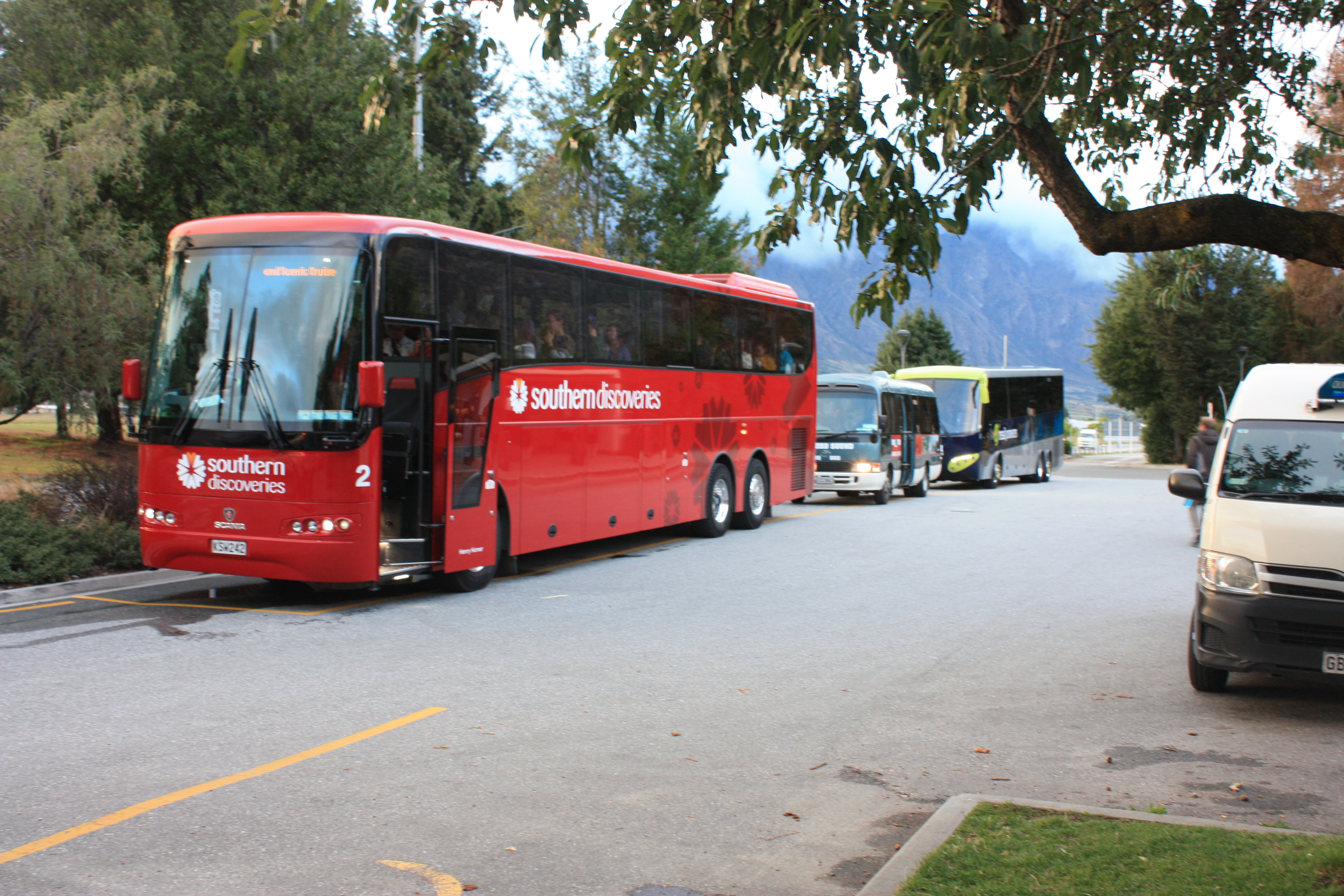 The bus we almost missed

This leg was terribly close to going terribly wrong. Mum and I almost missed our bus… even though we were waiting at the bus stop. It was a chilly 6-degree morning, and so we were sitting in her car, in an attempt to keep warm. We definitely stayed warmer than we would have outside, but that warmth came at a cost. From inside the car, we failed to hear the call for Dunedin. I spotted the destination ticket on the entrance door of the bus just as it was pulling out of the station. Dunedin. My heart dropped. I shot out of the car like a man possessed and stood in the driveway blocking the bus’ path. Mum was still inside the car, slowly coming to the realisation of what just almost happened. We got on the bus. We hung our heads in shame as we found our seats, avoiding all the disdainful glares from all of the passengers who’d managed to take their seats at an appropriate time and not hold everybody else up.

Step 2
Pick up a rental car and drive to Christchurch (4.5hrs) 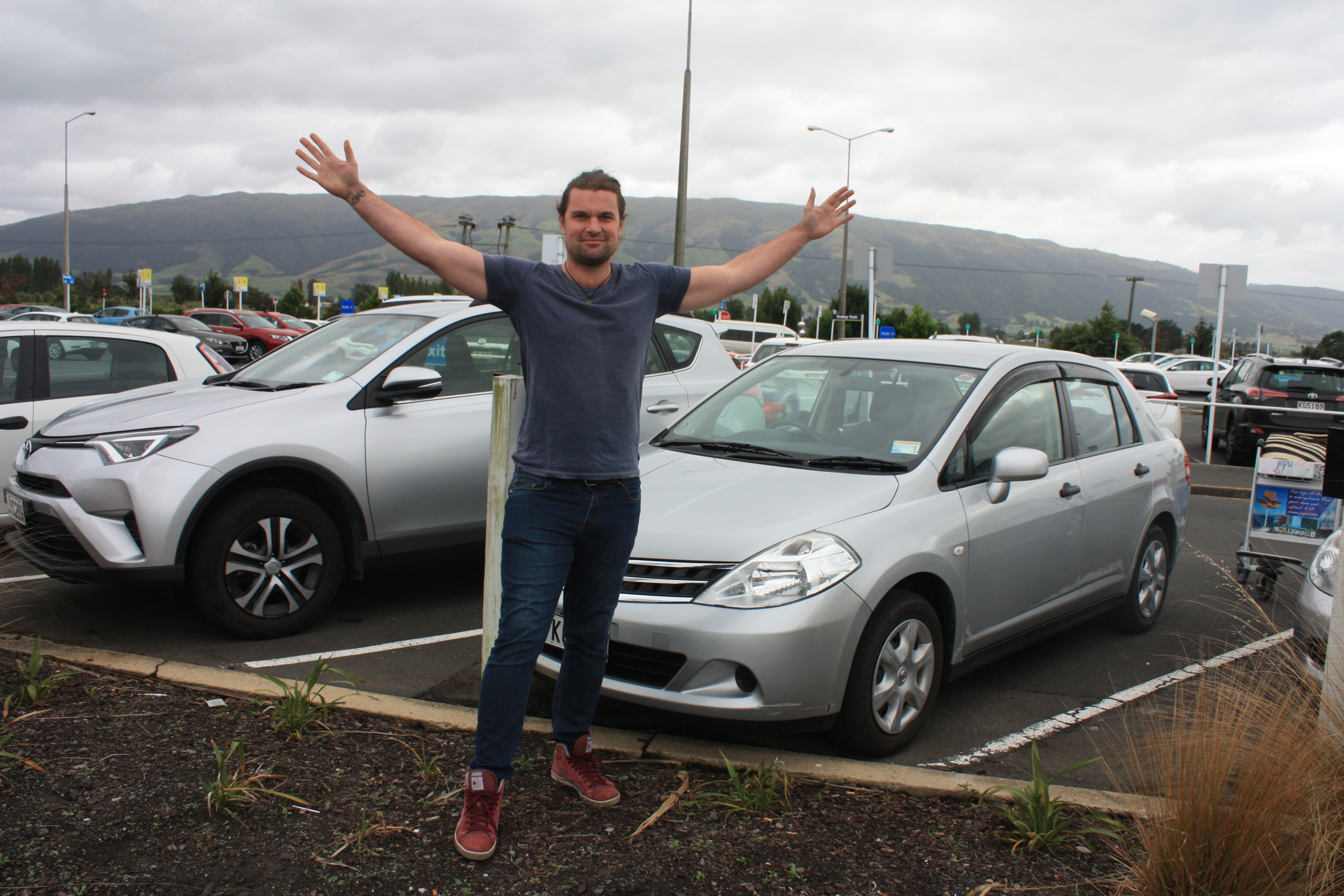 We disembarked the bus (couldn’t help but notice a few more scornful, how-dare-you-hold-me-up-do-you-not-know-how-important-i-am looks on the way off), collected our rental car, and drove to Christchurch without anything remarkable happening. My darling mother did take the opportunity to talk my ear off, but that was to be expected after not seeing each other for the better part of a year. We did also almost “lose” her credit card at a petrol station when she absent-mindedly threw it out with the coffee in the gutter. After throwing her card out, she proceeded to lose her nerve until we checked the security camera, which clearly showed her dropping it on the street. Crisis averted, but we were starting to fall behind schedule. 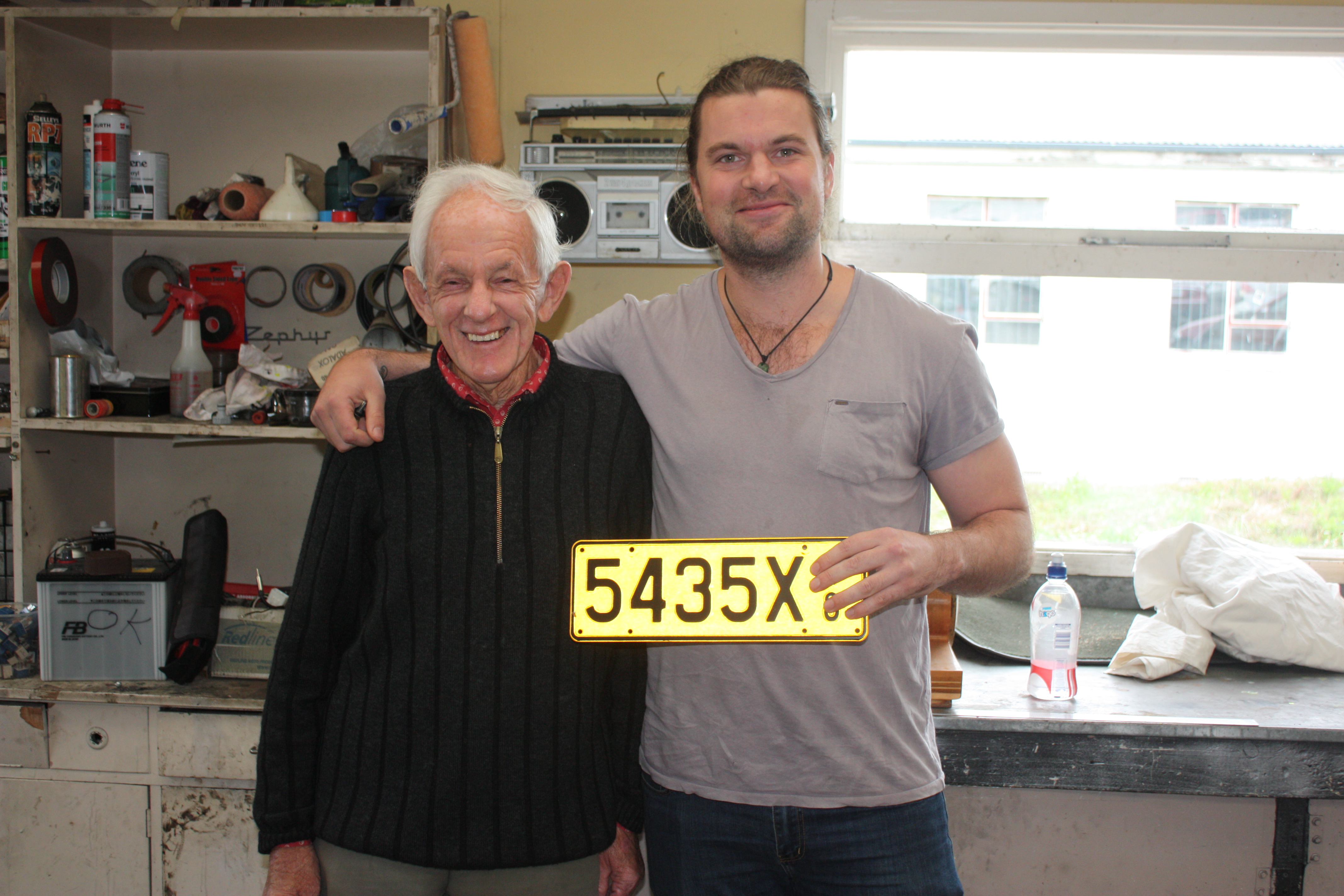 Alistair and I in his workshop

This leg of the journey was rather smooth, apart from taking slightly longer than anticipated. I would like to give a big shout out to my uncle Alistair for lending us his trade plates (see the photo above) and making this whole journey possible. In NZ you are only allowed to drive a vehicle on the roads if it has passed a warrant of fitness (WOF) within the last 6 months. A WOF checks the brakes, lights, tyres and other general safety checks to make sure the vehicle is road legal. This is where the trade plates come in. With a set of these bad boys you can drive any vehicle without a WOF, i.e. our bus, to a place of repair, i.e. our paddock in Clyde, legally. So, without my uncle and these plates, we would not have been able to drive our bus halfway down the country (….legally). So thank you, Alistair, very much.

Step 4
Drive to Picton (6.5hrs) drop of the rental car

This was one of the most stressful legs of the journey. The drive to Christchurch and picking up the trade plates had put us well behind schedule. We needed to be in Picton by 6pm to drop off our rental car, and it was 10am before we left Christchurch, leaving us only an hour and a half of extra time to account for delays.

Heaps of time, I hear you thinking. Well, funny story - remember that storm I mentioned I got caught in driving to the Gold Coast to catch my flight? Well, that storm was actually the edge of a cyclone, a cyclone that went on to ravage the road from Christchurch to Picton, meaning all traffic was diverted down a way that really wasn’t cut out to be the only path from Christchurch to Picton. Couple that with a road slip every few kilometres meant we were pressed for time, poorly. It felt like the storm that hampered me in Brisbane was having another go at ruining my carefully orchestrated plans. However, we managed to get into Picton at 5:55pm just in time to avoid and late return fees put on us by the rental company. 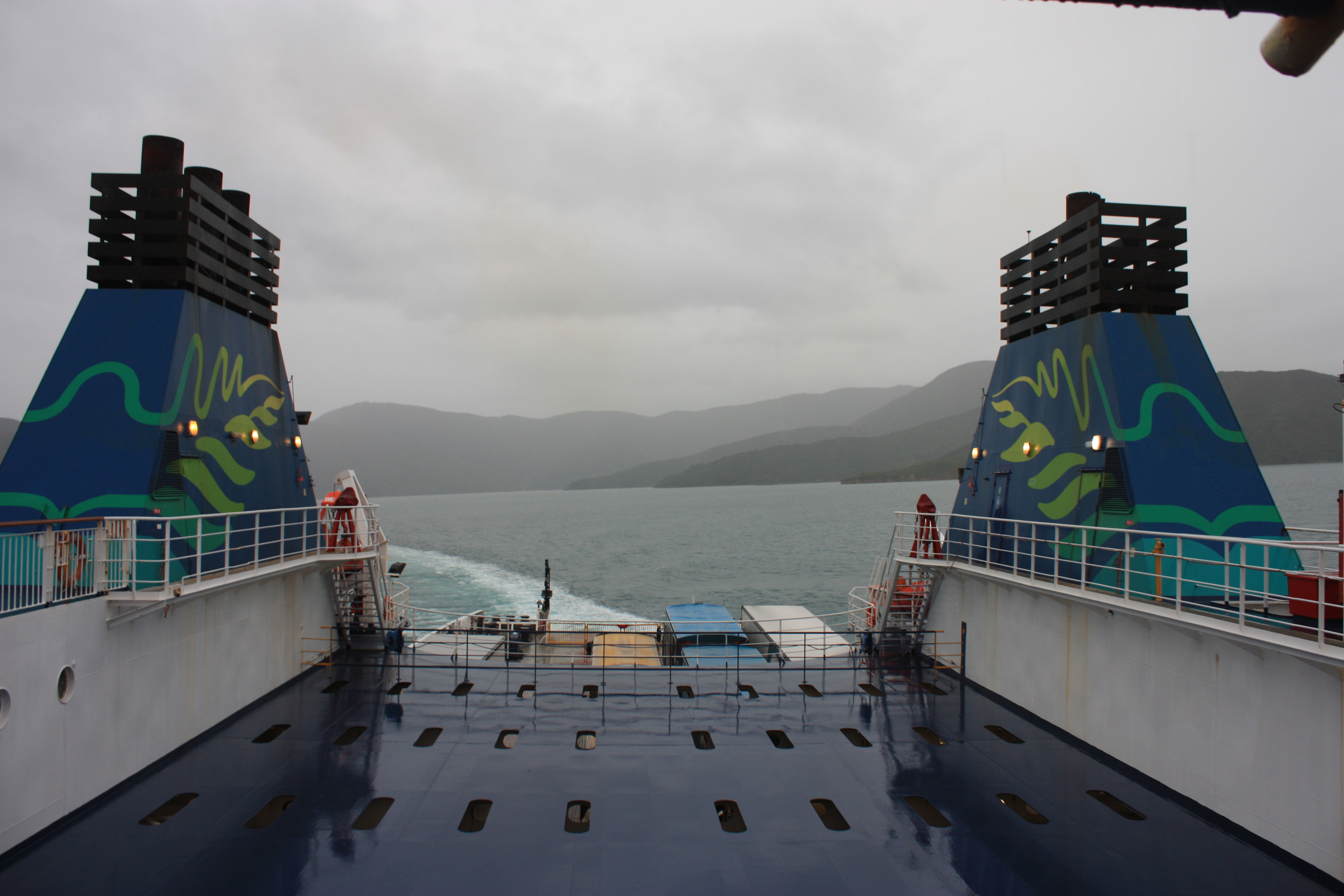 I can say without a doubt that this was the most enjoyable leg of the journey. Mum decided to upgrade us to the “lounge” on the ferry meaning we had unlimited food & drinks. I ate until I could eat no more, and drank just enough to take the edge off (and then some for luck). This 4-hour ferry ride was a very welcome rest after 13+ hours of driving all day.

Once we arrived in Wellington, we were met at the harbour by Mum’s cousin, David. He’d kindly offered to host us for the night, so we rested up at his home, in preparation for a massive day again tomorrow.

Another big thank you to David for your generous hospitality. 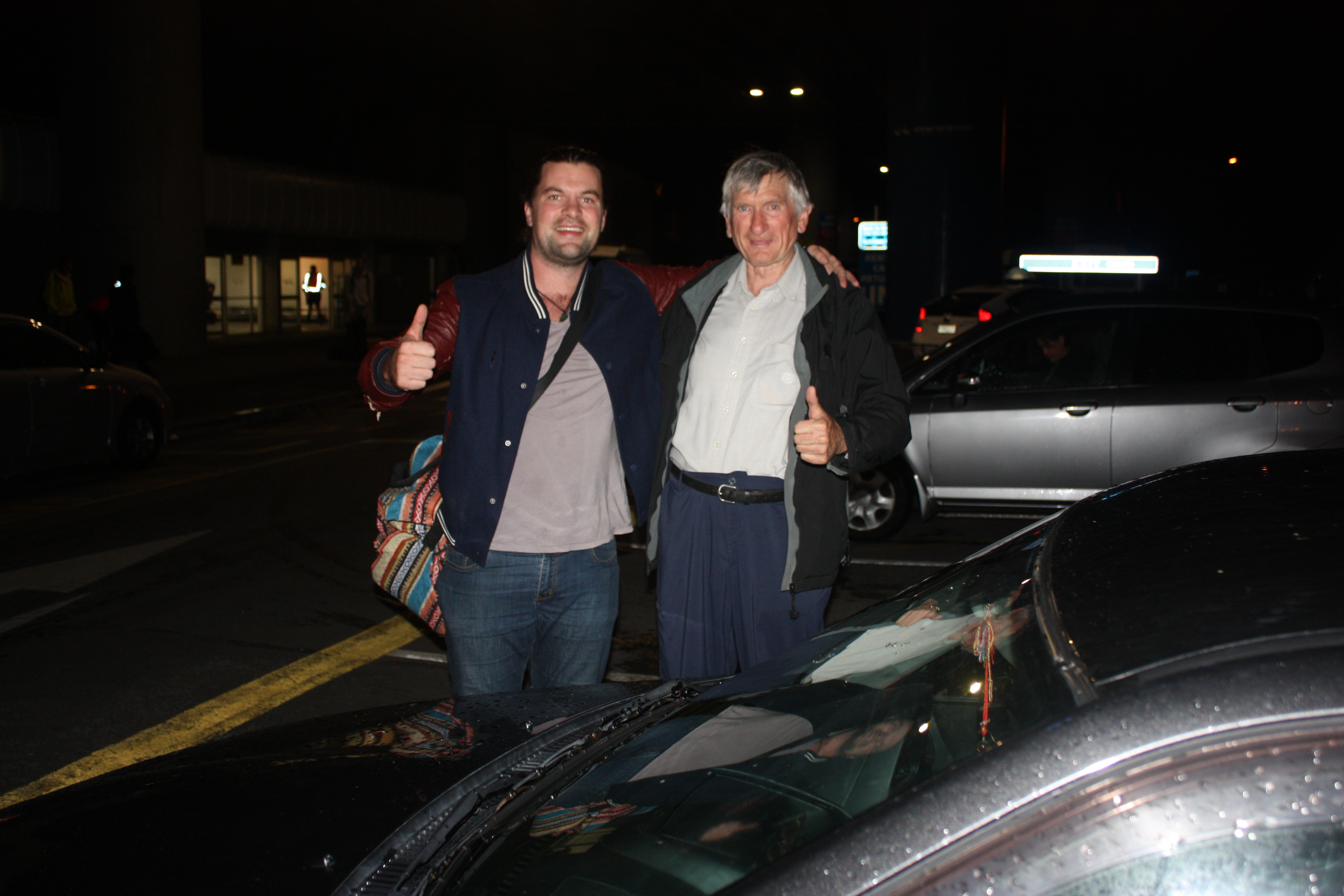 Step 6
Pick up the bus

As luck would have it, the bus was parked just a few minutes drive from cousin David’s house. He kindly gave us a ride to the Marai, where she was waiting for us. I still remember the first time I saw her, over the crest of a modest hill, the first thing that struck me was her sheer size. You can tell yourself you’ve bought a 12-tonne bus a million times, but until you actually see it in the flesh, it’s hard to comprehend. 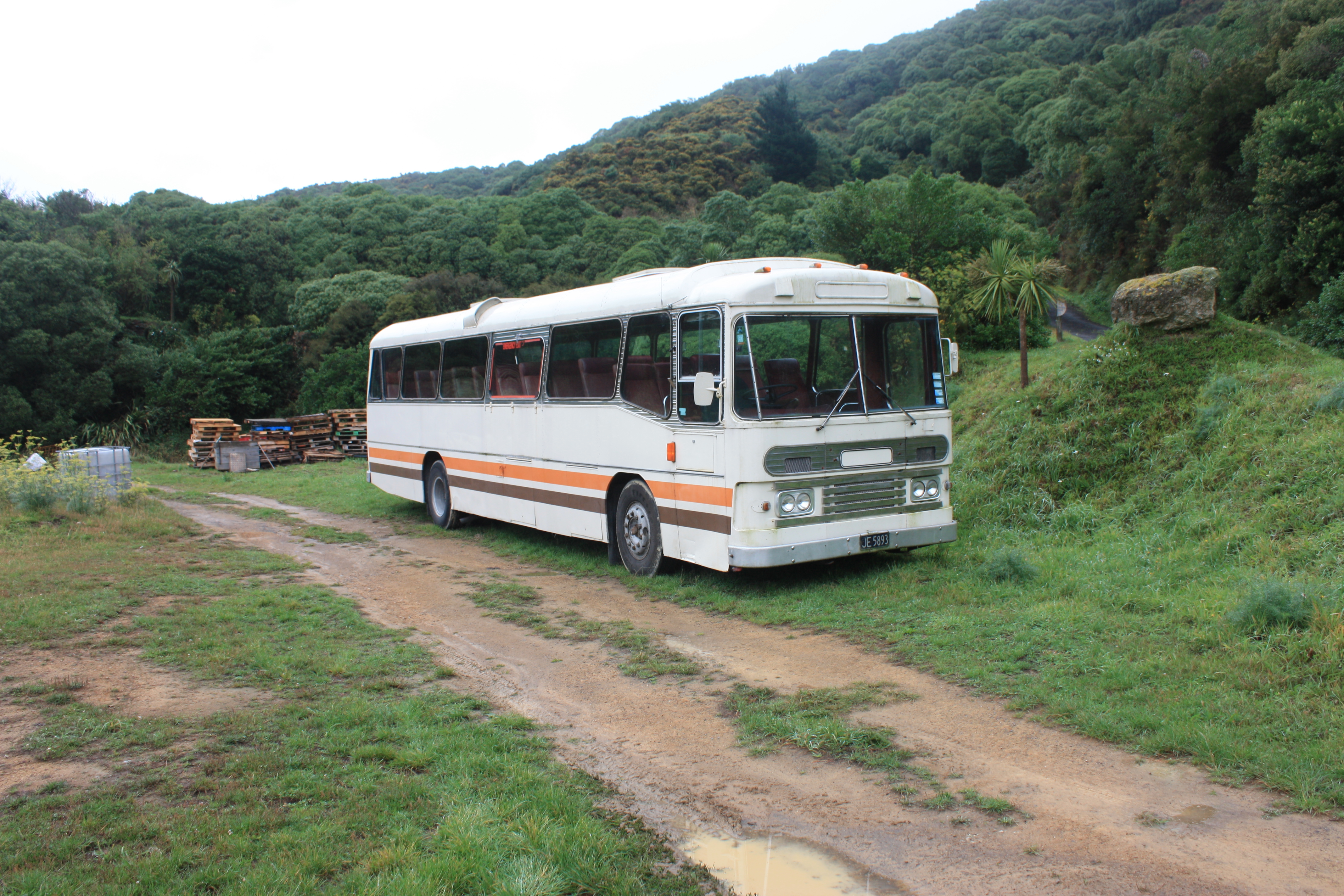 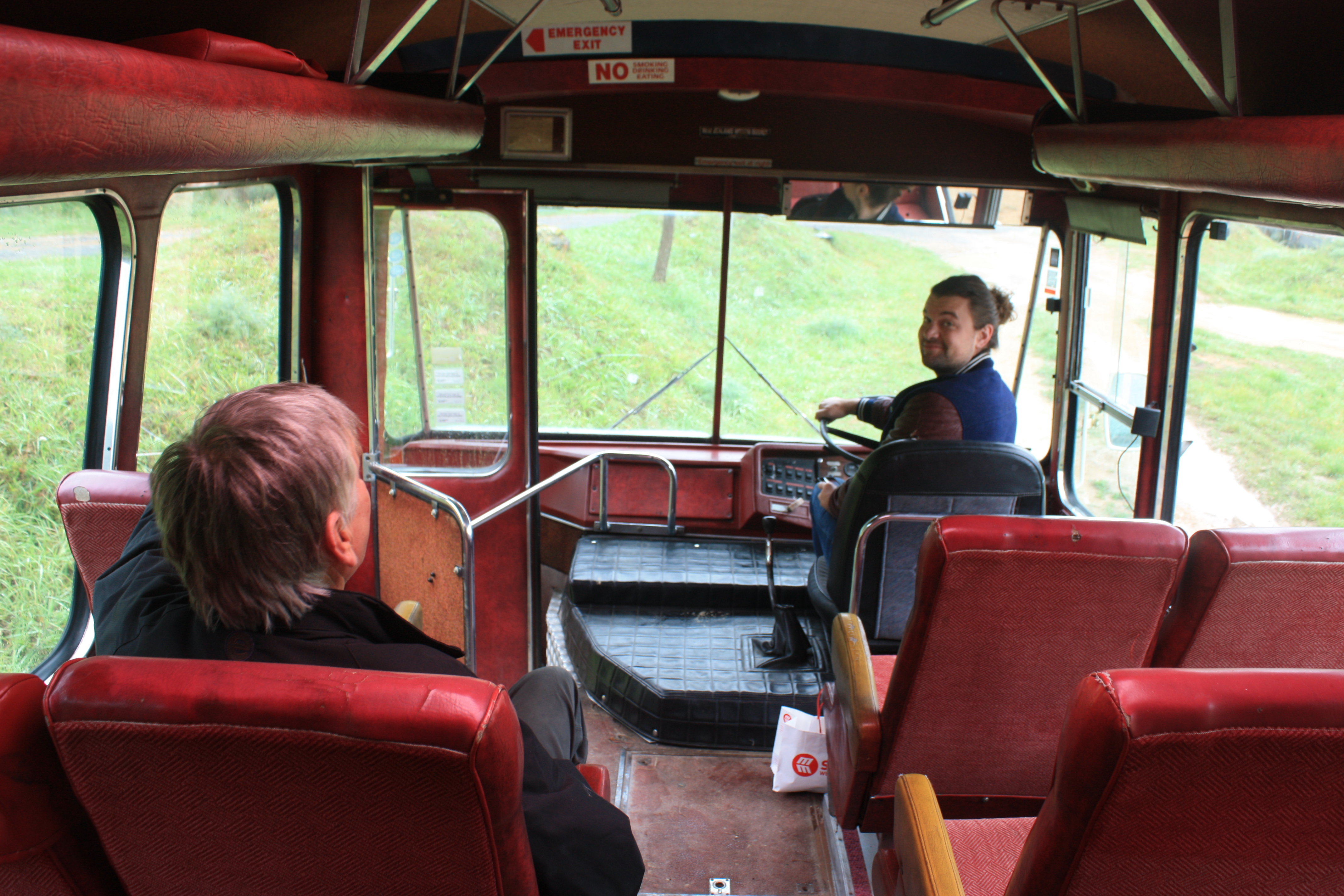 First time inside our bus

The next part was… interesting. I was quite confident about driving the trucks I had learnt in back in Australia. This, however, was a whole other kettle of fish. For starters, our bus was manual, almost none of the synchros worked in the gearbox, the steering needs an overhaul, the mirrors were too covered in a mould to be any use, and the roads were a lot smaller than the industrial complex I learned to drive on. The very first corner I had to take, I got stuck and had to ask a lady to move her parked car because my turning angle would have come into contact with her car, and to get out of the situation I would have to perform a reverse hill start around the corner I’d just come from. 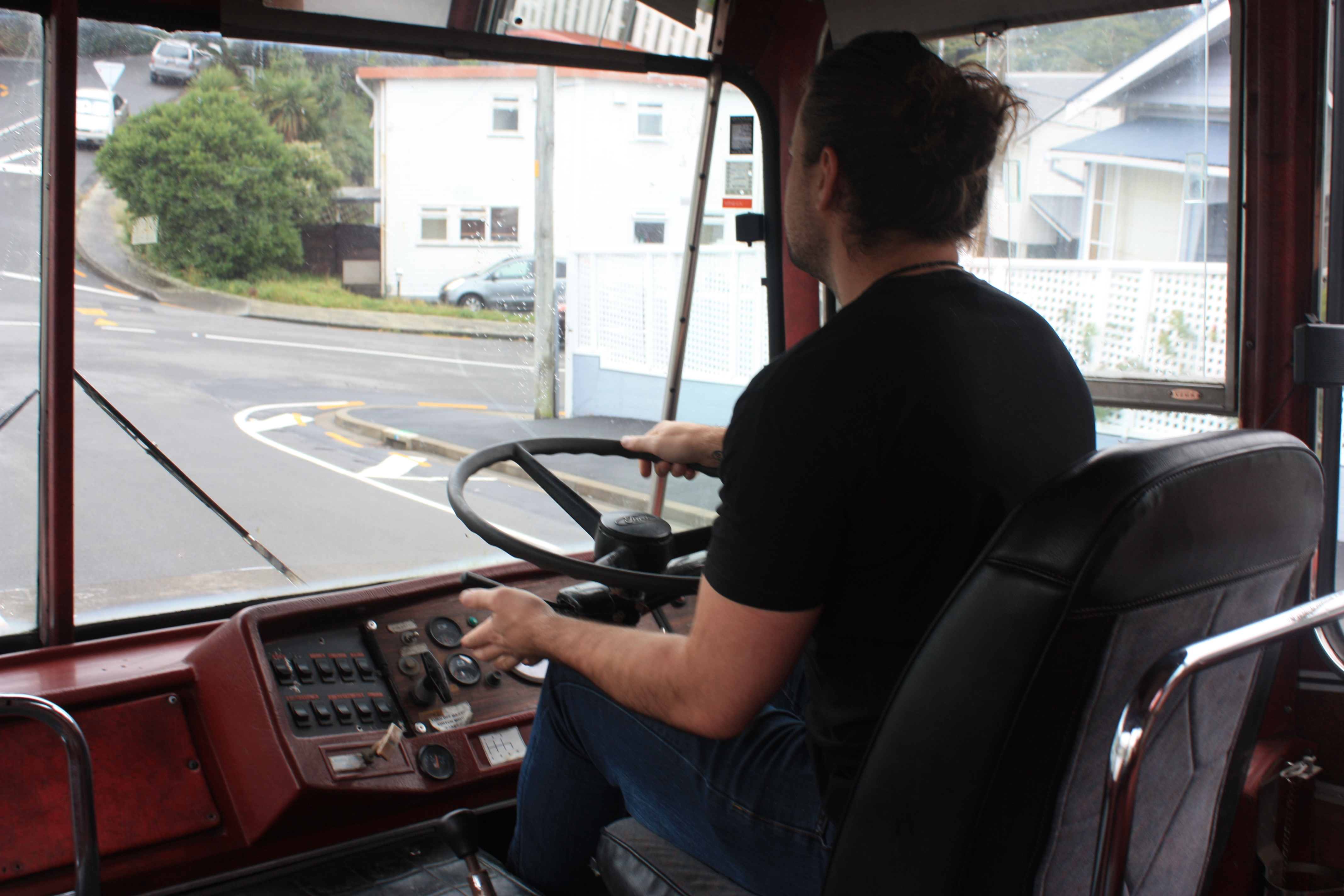 Another notable event was when Mum took on the role of chief navigator. I love her dearly, but for some reason, she took us through Wellington CBD… at peak hour. Once we realised where we were, I distinctly remember strictly banning all talking inside the bus until we were out of this mess.

We made it out of the mess (the CBD), and we can now laugh about how horrible an experience it was.

After some pretty hazardous practice driving, it was time to get back onto the ferry to start our return journey. Nothing out of the ordinary happened on the way to Step 8, just a whole load of embarrassing stalls in highly inconvenient places. 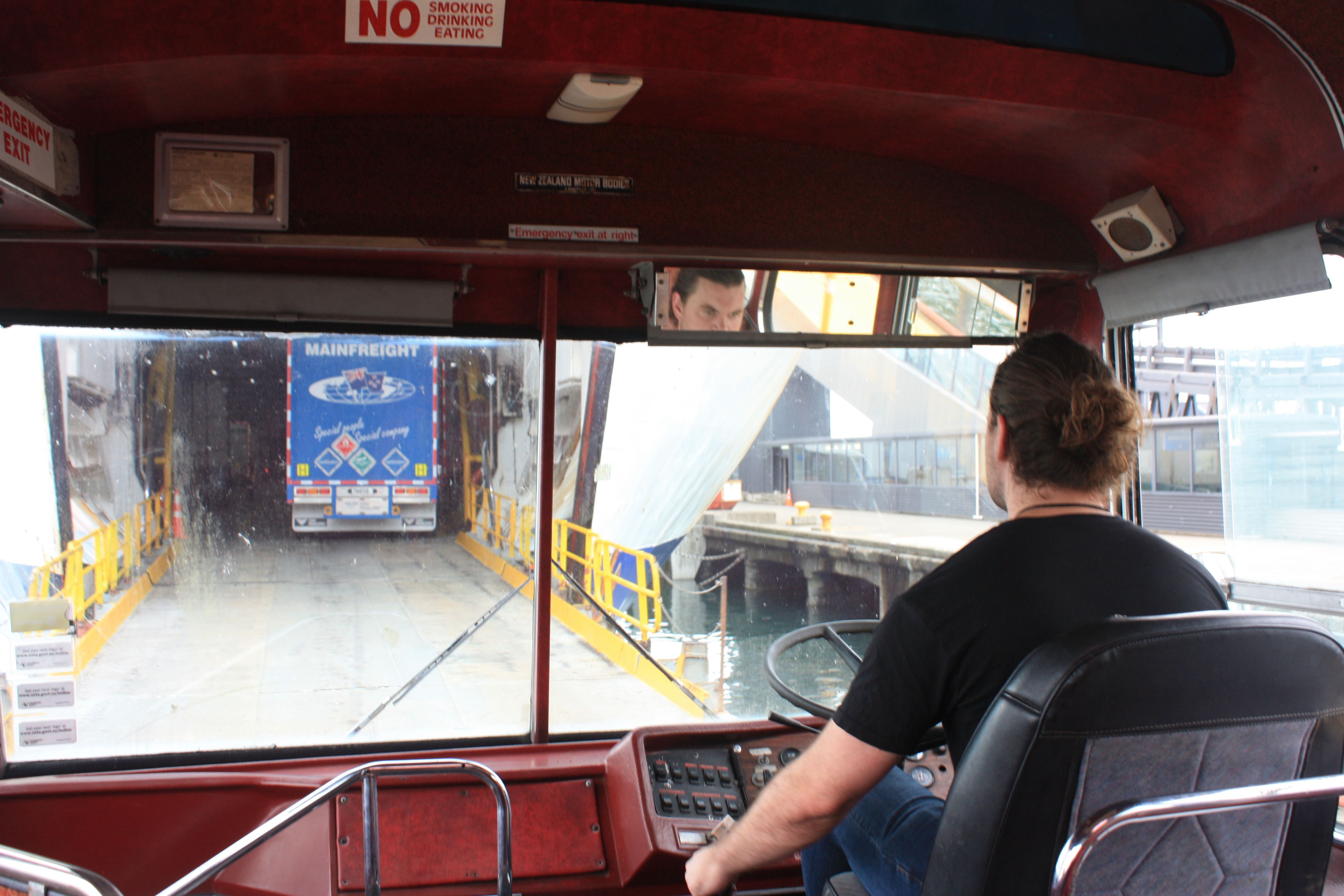 Getting on the ferry again - this time bus in hand

Step 8
Drive from Picton back to Clyde 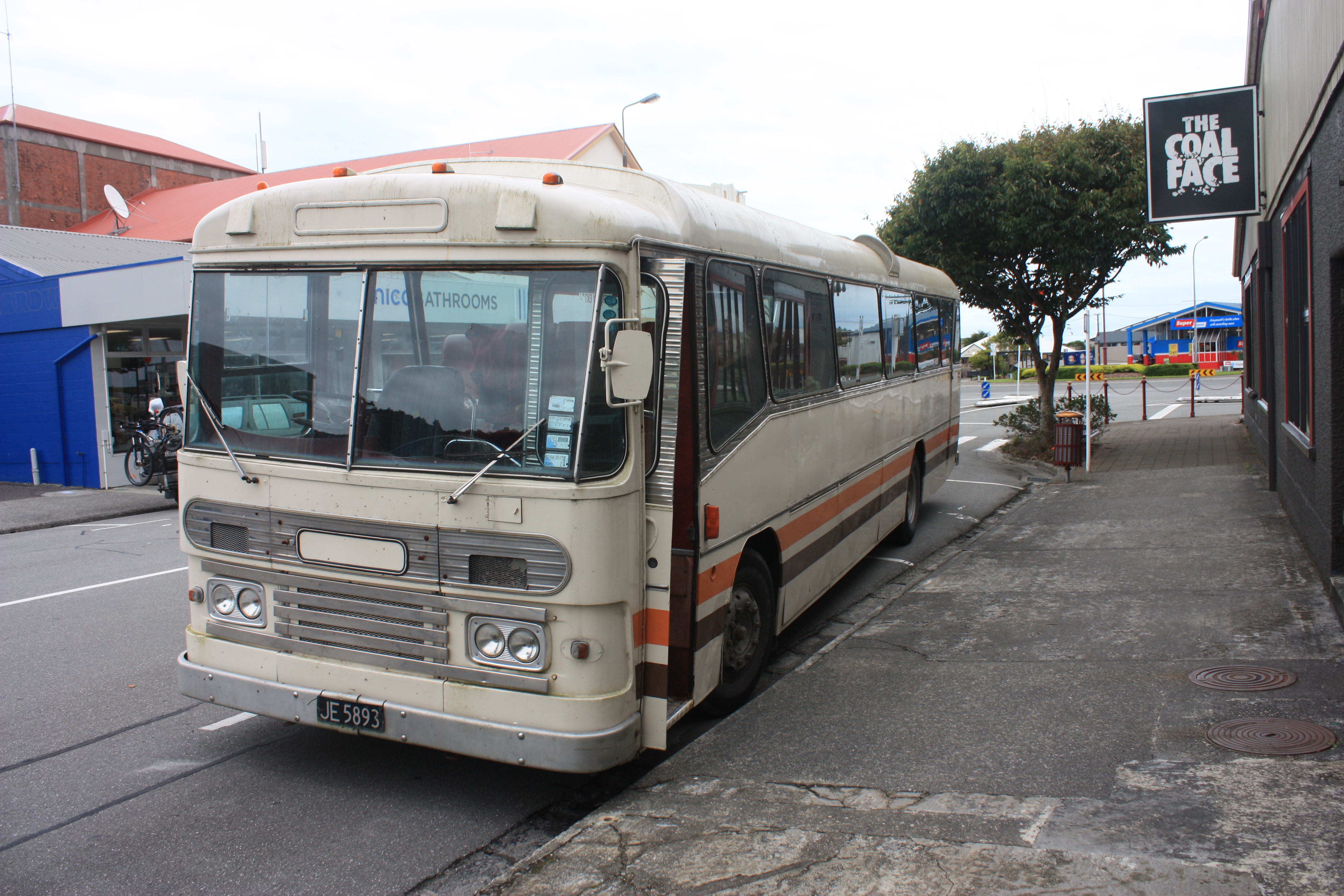 The drive from Picton to Clyde is 14 hours by car. Easy, we thought, we will take turns and burn the midnight oil. We will be back in one night! 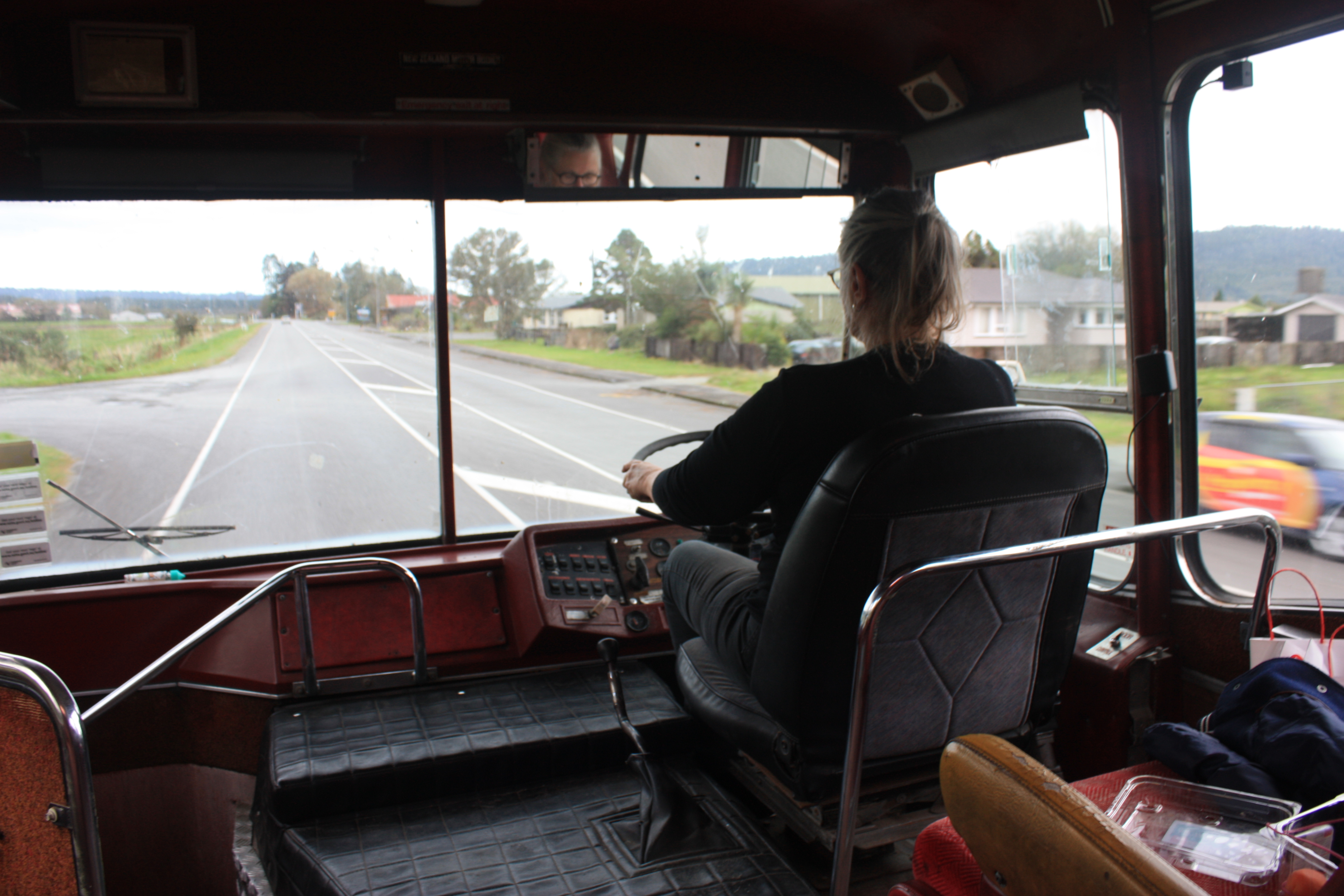 Or so we thought. It turns out 14 hours by car equates to 22 hours in a bus with terrible steering and a gearbox that desperately needs work. We were 12 hours into our drive when we accepted that we were a lot further than 2 hours from our destination, as we should have been by that time. It was nearing 3am, we were both extremely fatigued, so we parked up in some non-descript small town for a good night’s sleep (Mum stretched down the aisle with a blanket, and me on the back seats).

We didn’t manage to conjure up and energy or motivation to take any photos of this stretch. It wasn’t really a “hey, let’s take a photo” kinda night. 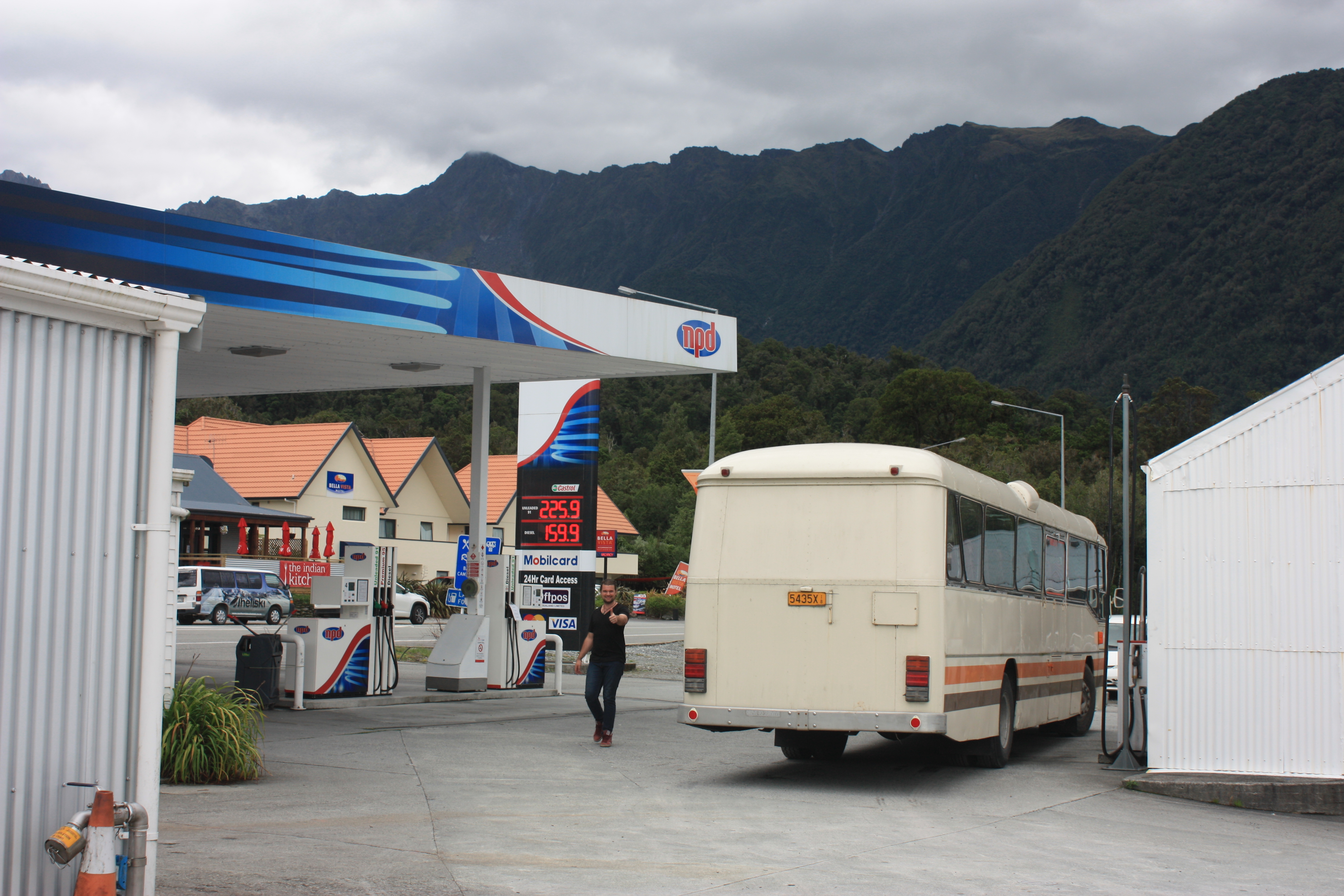 Our last fill up in Franz Joseph Glacier

The next day actually went quite quickly (mentally). We were on the home stretch, the end was in sight. All we had to do was drive home, and it could take as long as we needed. No more stress, no more deadlines, the hard work was behind us. We stopped off at a few coffee shops and food carts along the way and even picked up a couple of friendly hitchhikers. They were with us for 2-3 hours while we descended the West Coast before making the crossover into the Great Lakes District. 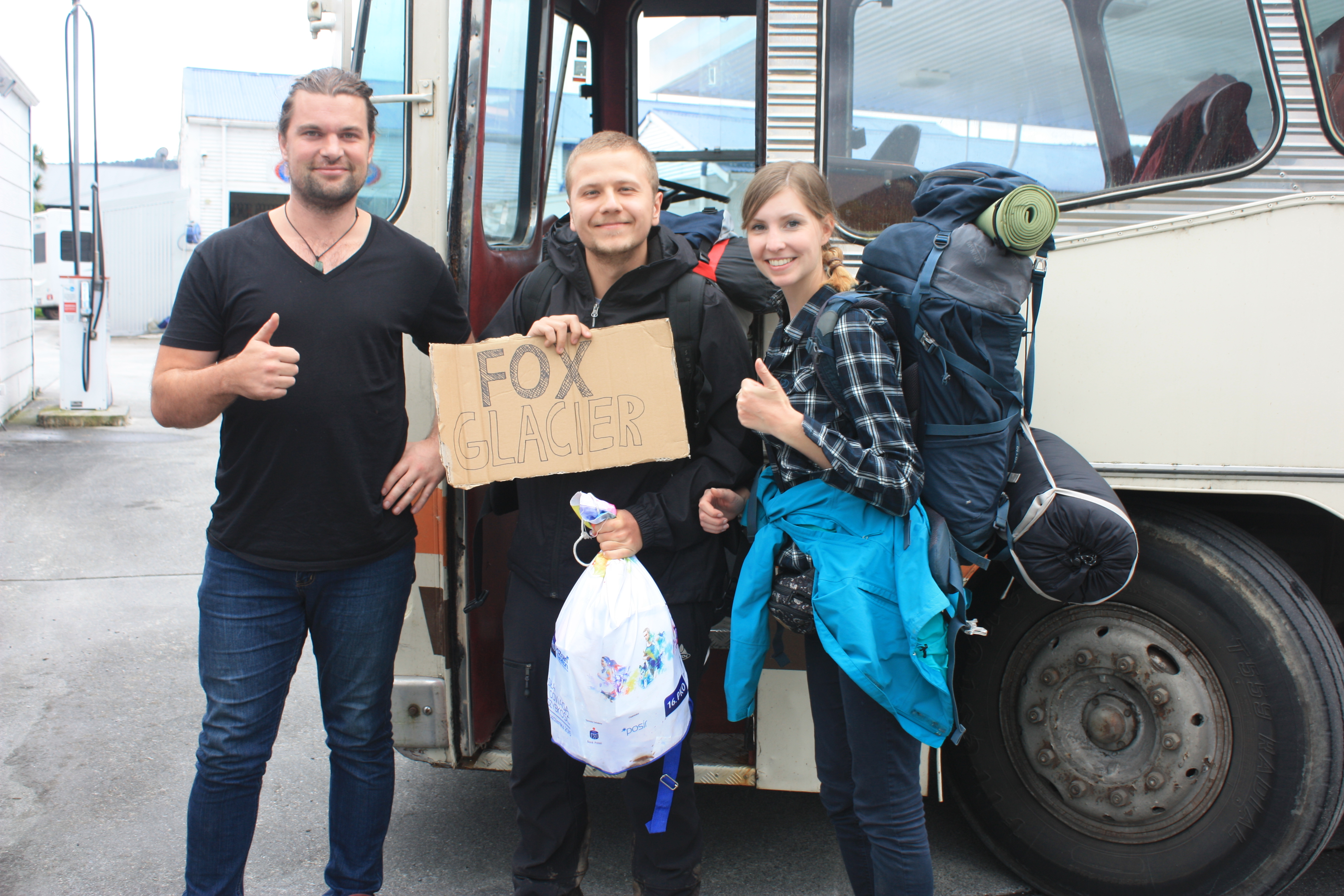 I’m sure they’ll be the first of many hitchhikers we pick up!

So that was the journey. It was gruelling at times, and positively tested Mum and me, BUT we did it! The bus is now safely in Clyde, where we will be storing it until we’re ready to move over and get to work on it.

I will leave you with some different photos of the drive, in chronological order. Hopefully, these photos show you why we went to so much effort to get our bus to the South Island of New Zealand and build it there. It really is breathtakingly beautiful. 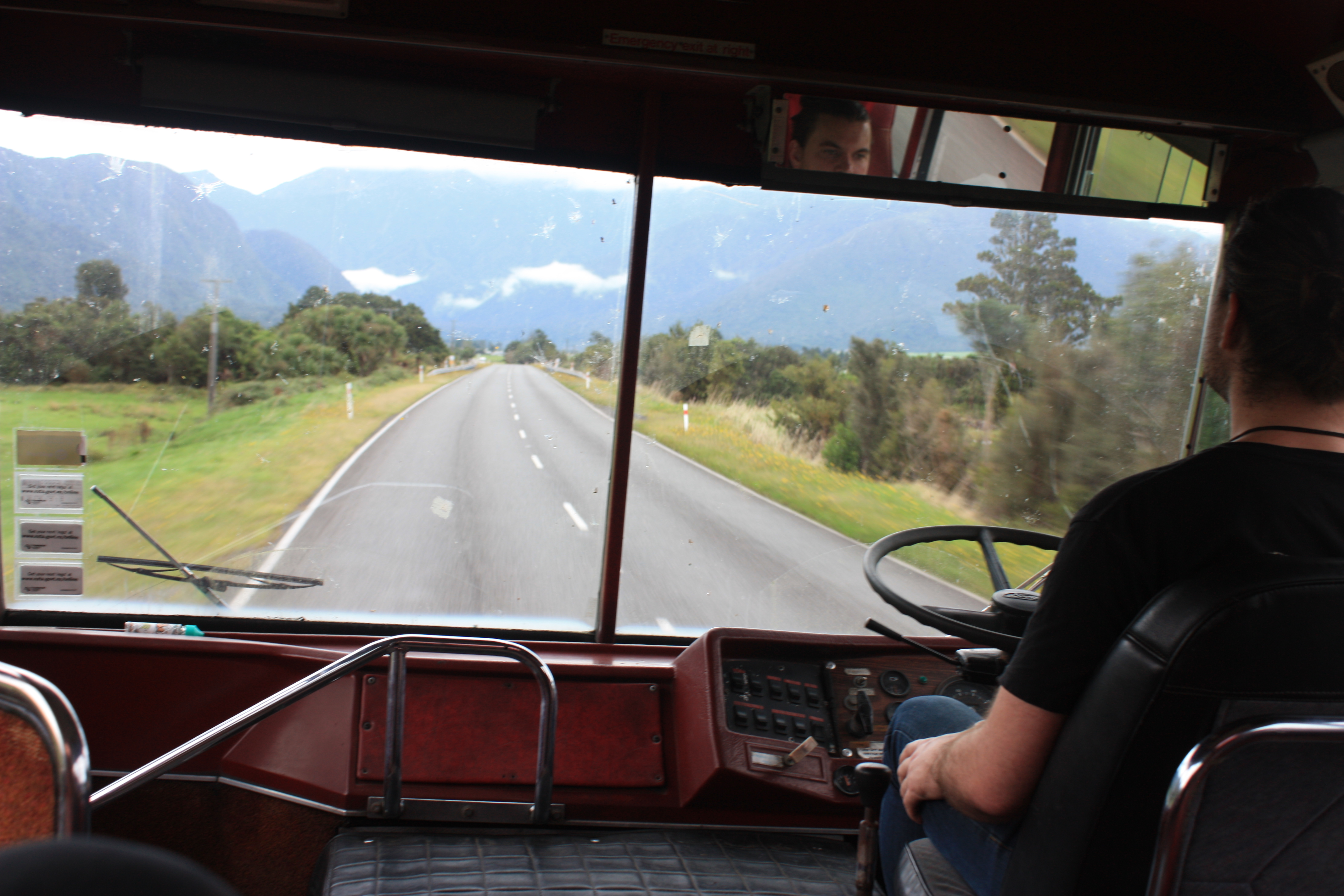 One bend at a time 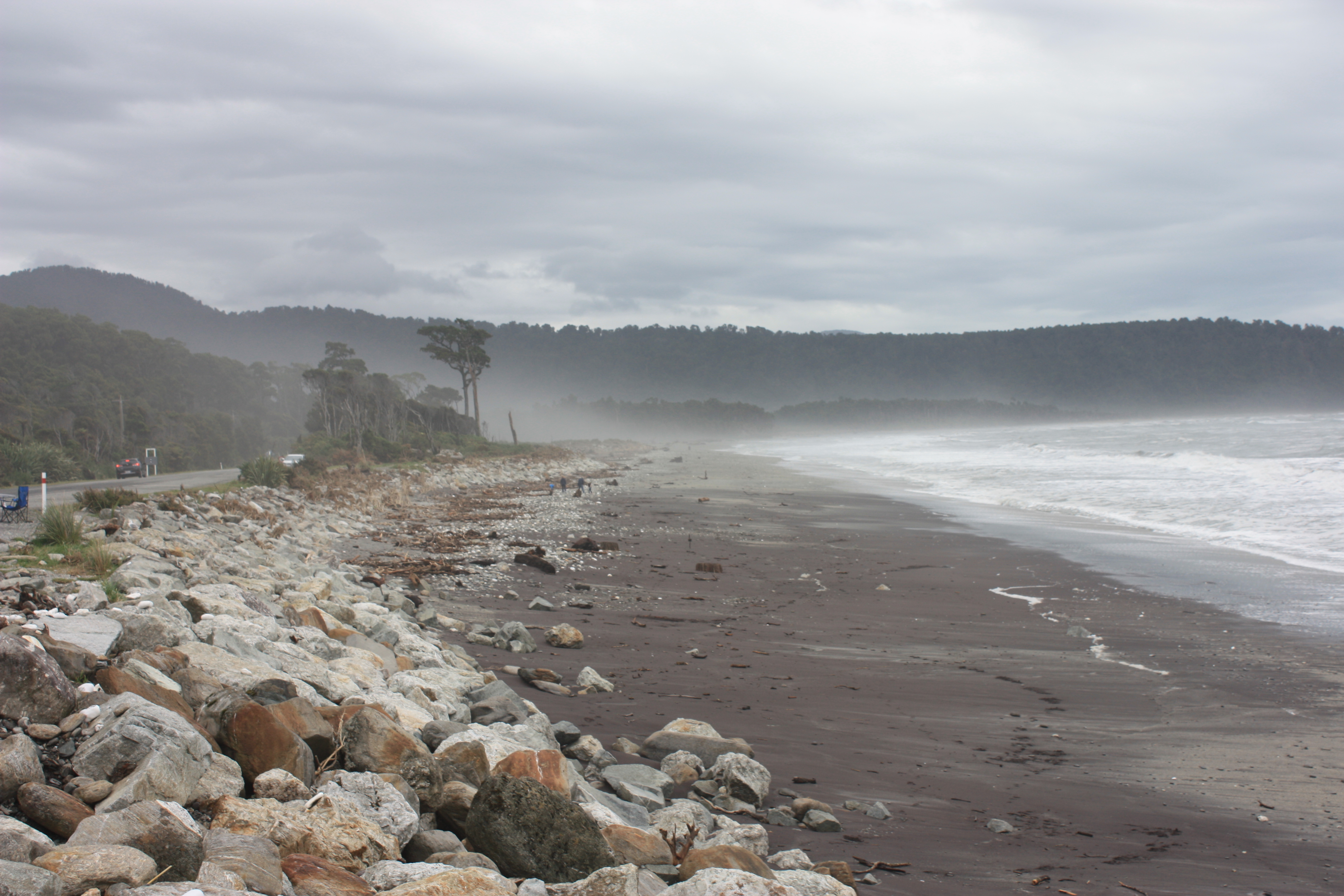 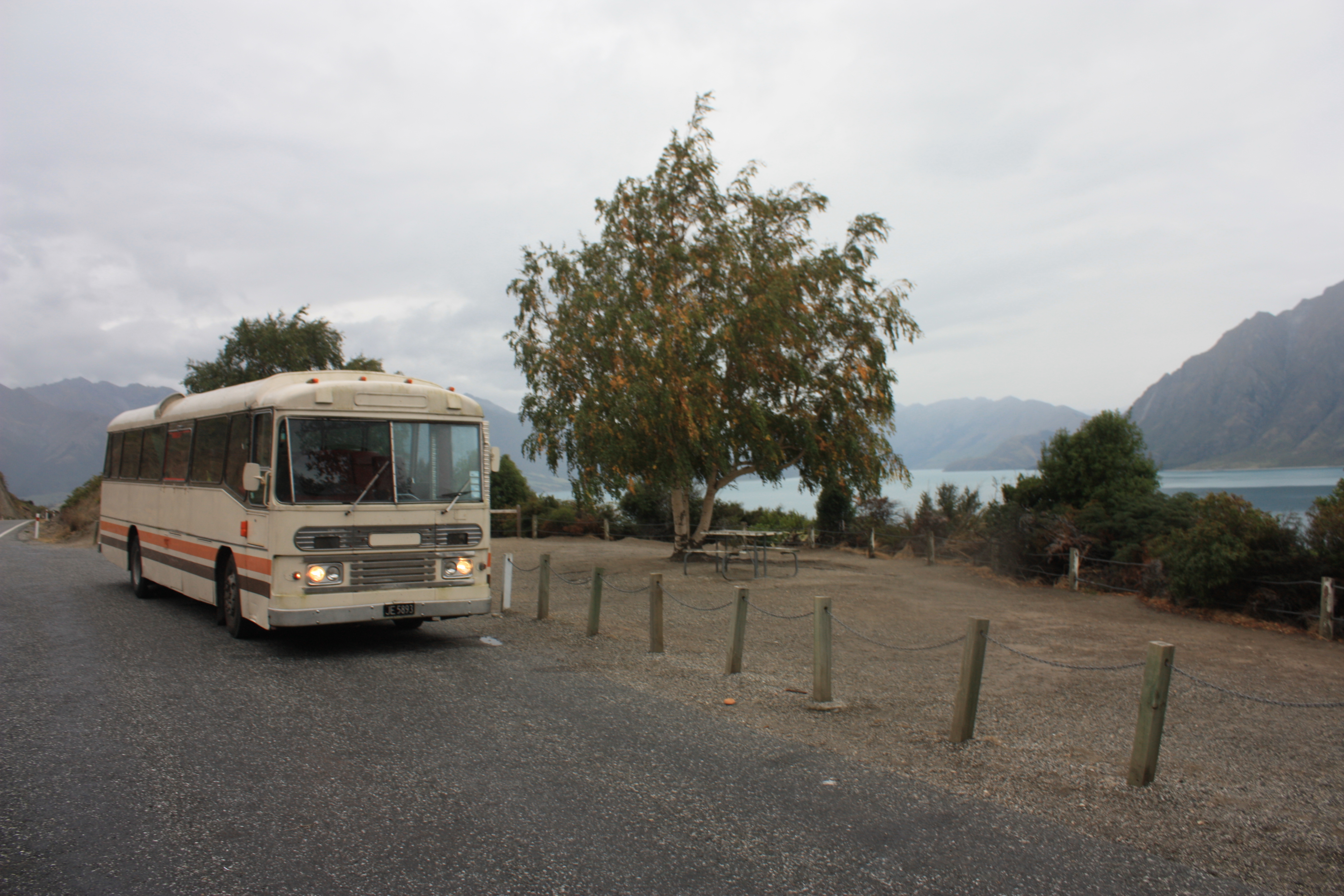 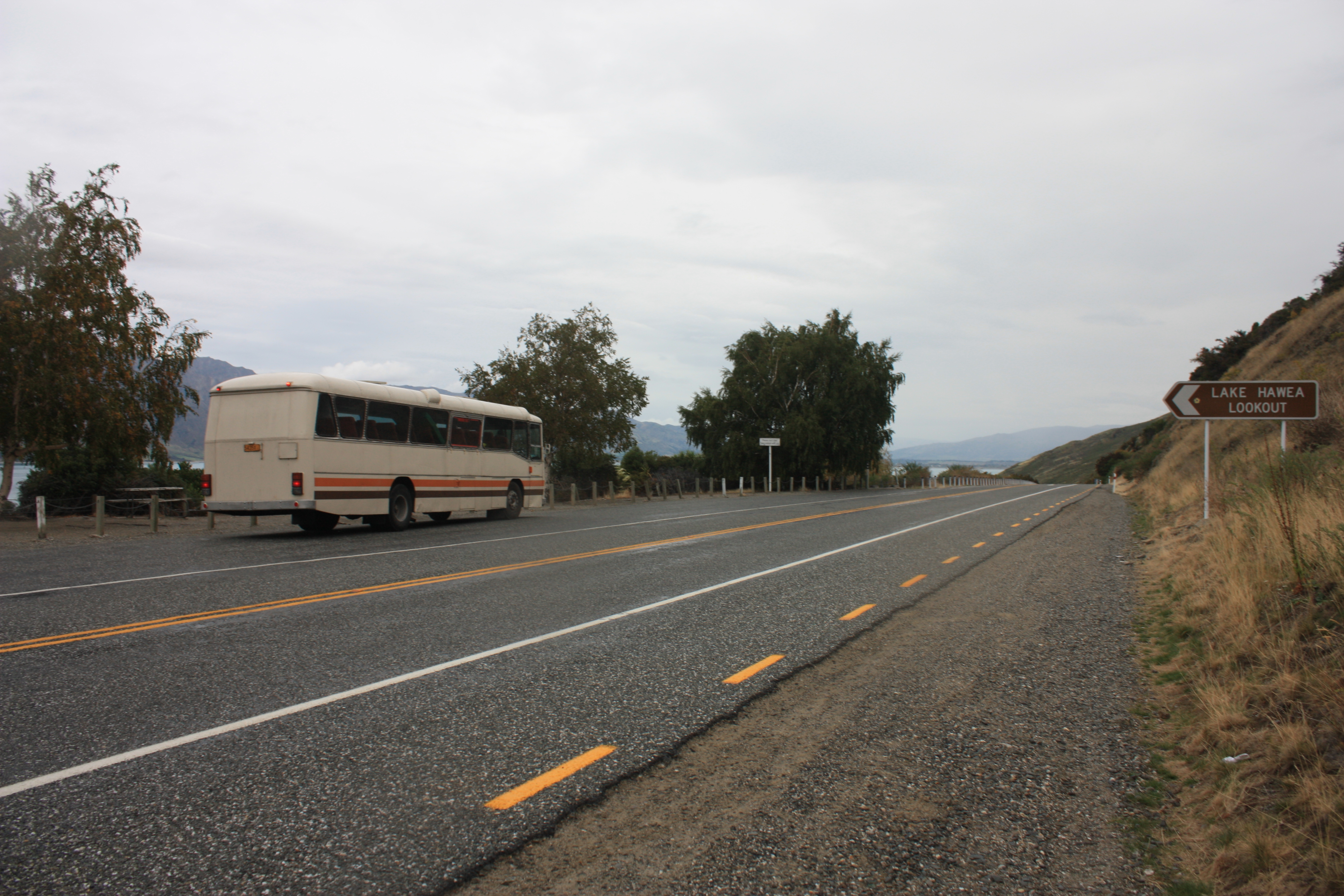 1 hour that way is home

« Previous: Finding The One Next: Our tips on demolishing bus interiors »